On 19 May 2012, Chicago Blogger and Videocaster, Timcast, may have been raided by the Chicago Police Department without a warrant and without any exigent circumstance. At this time, it appears as if someone in the Timcast group of friends or Timcast himself were not home when the raid happened, but someone they were staying with who has a boyfriend on the Chicago Police Department had relayed the details of a raid that are now conflicting. This unidentified female apparently told someone in the Timcast group one story and then told Occupiers a conflicting story.

First, she said she was denied entry to the apartment and then she said she saw the police but did not make contact with them and walked away. Because of these conflicting stories and for his own safety, Timcast and their group are staying in a hotel tonight.

This reporter logged into the Livestream and asked Timcast about the raid details without any reply. The information printed here came from the details given during the Livestream. Later in the night on 19 May 2012, Timcast and the group were pulled over at gunpoint by Chicago Police. Timcast and the group state they have video of this incident. Shortwave America has that video here.

According to a statement by Timcast via the current Livestream, the video was either interrupted or deleted by Chicago Police during the stop before it could be recorded in the UStream archive. At this time, Shortwave America has learned directly from the Timcast livestream that Chicago Police are waiting to find out where Timcast and group are staying at and have plans to "meet him". 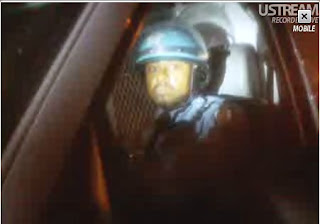 Above is a photo of the Chicago Police Officer who was allegedly driving the van that hit the protester in the video. Photo compliments of @Freddy1229 on Twitter.

Due to threatening and inappropriate comments in this post, comments have been disabled.