Home » Unlabelled » Motorola Moto G 2015 Is Getting The Android 6.0 Marshmallow Update In North America And Canada

Motorola Moto G 2015 Is Getting The Android 6.0 Marshmallow Update In North America And Canada

Motorola Moto G 2015 Is Getting The Android 6.0 Marshmallow Update In North America And Canada

It seems that Motorola is giving a Christmas gift to the users of Moto G (3rd Gen) by rolling out the android 6.0 Marshmallow update. The update has been released to the unlocked version of Moto G 2015 XT1540 in North America and Canada. The new software version is '24.11.25.en.US' and the update weighs nearly 460 MB which is not a big deal to download over Wi-Fi. However currently we are not posting the release notes but once they are available we will notify you. Currently, we can only show you the glimpse of what will be the new features in the android 6.0 Marshmallow for the Moto G (3rd Gen). 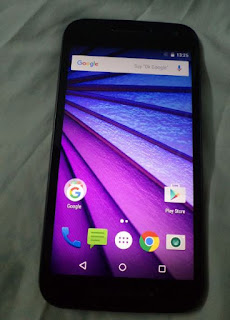 You will get all the features of android M after installing it on your http://innaz2.blogspot.com /2015/12/motorola-moto-g-3rd-generation-vs-moto-g-turbo-edition.html" target="_blank">Moto G 2015. The most interesting features of this new OS include the ability to use the external sd cards as internal storage. It is a useful feature that is also very useful for the users of the 8 GB Moto G3 model. The second feature is the 'Permission Control'. Now you can control the app permissions by simply disabling them for apps. This will increase your security and prevent the apps from unnecessarily accessing your personal data and phone's hardware resources. 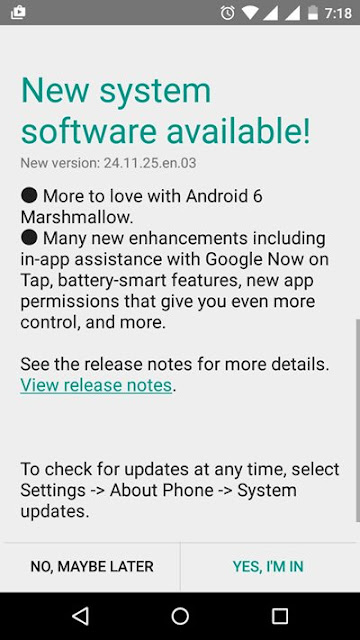 You will not find the 'Motorola Assist' and 'Motorola Migrate' apps on your phone after updating because Motorola has already confirmed the retirement of these apps with the launch of android Marshmallow. Other features include the 'Doze Mode', 'Now on Tap', 'Android Pay', 'Direct Share' and 'Simpler Volume Controls'.

Before updating make sure to enable 'Allow OEM unlocking' in 'Developer Options'. Because we can't say whether after updating your phone Google will trip 72-hour lockout or not. If 'Developer Options' is not visible then go to 'Settings>About phone' and tap on 'Build number' 10 times to unlock it. Read more about http://innaz2.blogspot.com /2015/12/what-is-factory-reset-protection-google-72-hour-lockout-android-lollipop.html" target="_blank">factory reset protection. After updating to android 6.0 you can disable this 'OEM unlock' to enable factory reset protection.

If you live in North America and Canada then you can get this update. Just go to 'Settings>About device>System updates'. If the update is available then you will receive a notification. Tap 'YES, I'M IN' and follow the instructions to download the OTA. Make sure you have a Wi-Fi connection.

so much information Motorola Moto G 2015 Is Getting The Android 6.0 Marshmallow Update In North America And Canada

Related : Motorola Moto G 2015 Is Getting The Android 6.0 Marshmallow Update In North America And Canada